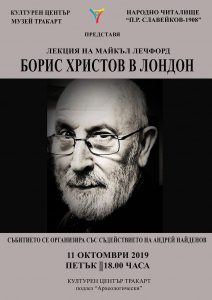 Michael Letchford’s lecture entitled “Boris Hristov in London” met with great success at Trakart Cultural centre on 11th October 2019 at 18.00. In 1967, Michael Letchford joined EMI and over the next 34 years, he had been working on the marketing of classic records for EMI, Decca and, finally, Warner Classics International as a general manager and later as a director and repertoire developer. During the period of time he worked at Warner Classics, he was the executive producer of many records of Jose Carreras, Jose Cura, Sir Andrew Davis, Thomas Hampson, Sharon Kam, Dame Kiri Te Canawa, Sir. Neville Marriner, a choir from New College, Oxford, Ettore Stratta and others. After completing his 35-year career of popularization and participation in the creation of classic records, Michael devoted himself to the study of the life of exceptional singers from the past, whose careers and achievements were lost or neglected in the course of time.